By hopewellah February 14, 2019 Uncategorized
No Comments

So last night we received a report of a puppy passing away from a parvo virus infection, the infection occurred at the Ulster county SPCA, we encourage all clients to ensure that your dog is up to date on this vaccine.  The disease can be fatal and the vaccine is very effective at preventing the disease.  We can also use titers for those patients that are unable to take the vaccine.  Below we have reprinted an information article about parvo. Please feel free to contact us if you have any questions about this disease or the outbreak.

Parvovirus: How it Happens

Wendy Brooks, DVM, DABVP
Whether or not infection happens depends on the interaction of three factors: host vitality (including immune experience/vaccination status); virulence of the virus (including virus strain and how many viral particles the host is exposed to); and environmental factors (other stresses and/or concurrent conditions). Obviously these three aspects interplay somewhat (a stressful environment will reduce host vitality, a dry environment will reduce the number of viral particles etc.)

Where does the Virus come from?

Remember that this virus has been around since the 1970s, is hard to disinfect, and is shed in extremely large numbers by infected dogs. This means that there is virus everywhere: on every carpet, on every floor, in every yard and park. Virus is shed in the stool for the first two weeks or less after the initial infection but only a tiny portion of infected stool – which could be months old depending on the environmental temperature and humidity – is needed to infect a non-immune dog. Some dogs become what is called subclinically infected, which means they do not appear particularly sick. These animals tend not to be confined since no one knows they are infected, thus they can spread virus around a large area depending on where they leave their droppings.

The most important factors in whether parvovirus infection occurs seem to be the experience the dog’s immune system has had with the virus plus the number of viral particles the host is exposed to. In the 1970s and early 1980s when the virus was new, all dogs young and old were susceptible, but now that the virus is everywhere, all dogs, even the unvaccinated ones, have at least some immunological experience with this virus. Any exposure no matter how small is likely to generate some antibodies. Also, vaccination is a widespread process nowadays and it is likely that a dog has had at least one vaccine at some point. Will these antibodies be enough for protection? In general, the answer seems to be yes, depending on the dog’s age at vaccination and nature of the exposure; infection in dogs over one year old is somewhat unusual.  It is important to realize, however, that this observation should not be taken to mean that adult dogs should not continue their vaccinations. Even though infection is somewhat unusual in adult dogs, adult dogs should still continue their vaccinations as this is a life-threatening disease for which treatment is expensive. No chances should be taken.

The younger the dog, the less immunologic experience and the more susceptibility to infection there is.

When puppies are born, they are completely unable to make antibodies against any infectious invader. They would be totally unprotected except that nature has created a system to protect them. Their mother secretes a specific type of milk called colostrum for the first day or two after giving birth. It contains all the antibodies that the mother dog has circulating in her own body and in this way, she gives her own immune experience to her off-spring. These antibodies are protective until they wear off sometime in the first 4 months of the puppy’s life.

How much colostrum an individual puppy gets depends on its birth order and how strong it nurses; not all puppies get the same amount of antibodies. Every nine days the antibody levels possessed by the puppies drops by half. When the antibody level drops to a certain level, they no longer have enough antibody to protect them and if they are exposed to a large enough number of viral particles, they will get infected. The age at which maternal antibodies disappear is different for each individual puppy and is not predictable.

We recommend that puppies be restricted from public outdoor areas until their vaccination series is completed at age 16 weeks.

There is a period of a week or so during which the puppy has no antibody protection left over from its mother but still is not yet competent to respond to vaccination. This window is where even the most well cared for puppies get infected.

The virus enters the body through the mouth as the puppy cleans itself or eats food off the ground or floor. A minuscule amount of infected stool is all it takes.

There is a 3-7 day incubation period before the puppy seems obviously ill.

Upon entering the body, the virus seeks out the nearest rapidly dividing group of cells. The lymph nodes in the throat fit the bill and the virus sets up here first and replicates to large numbers. After a couple of days, so much virus has been produced that significant amounts of it have been released into the bloodstream. Over the next three to four days, the virus seeks new organs containing the rapidly dividing cells it needs: the bone marrow and the delicate intestinal cells.

The GI tract is where the heaviest damage occurs. The normal intestine possesses little finger-like protrusions called villi. Having these tiny fingers greatly increases the surface area available for the absorption of fluid and nutrients. To make the surface area available for absorption greater still, the villi possess microvilli, which are microscopic protrusions. The cells of the villi are relatively short-lived and are readily replaced by new cells. The source of the new cells is the rapidly dividing area at the foot of the villi called the crypts of Lieberkuhn. Parvovirus strikes right at the crypt.

Without new cells coming from the crypt, the villus becomes blunted and unable to absorb nutrients. Diarrhea in large quantities results, not to mention nausea. The barrier separating the digestive bacteria from the blood stream breaks down. The diarrhea becomes bloody and bacteria can enter the body, causing widespread infection (remember that that virus has also simultaneously destroyed the bone marrow’s ability to respond immunologically). 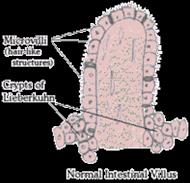 The virus kills dogs in one of two ways:

How is Survival Possible?

Even parvovirus cannot disrupt the entire immune system. Plus, every day that goes by allows more antibodies to be produced. This antibody can bind and inactivate the virus. Whether survival is possible amounts to a race between the damaged immune system trying to recover and respond versus the fluid loss and bacterial invasion.