What is with all the ear infections? 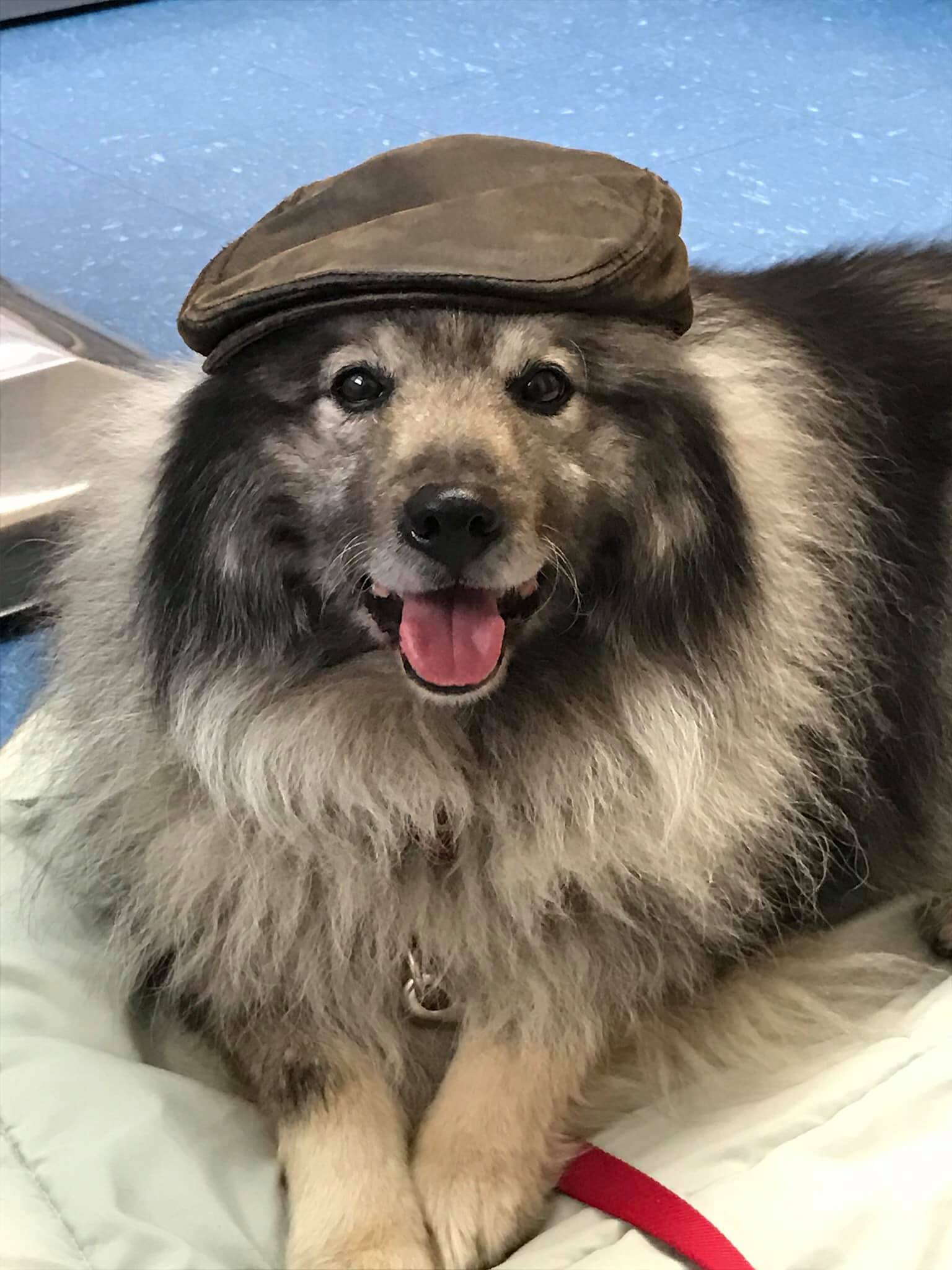 Dogs seem to get ear infections with a surprising frequency and some dogs have to deal with ear infections nearly constantly. When one considers that human ear infections seem few and far between, one wonders how man’s best friend came to be so unlucky. It turns out there are a couple of factors at work: the shape of the ear canal and the common frequency of conditions leading to excess ear wax.  Recently, we have been noting more ear infections later in the year then we traditionally do.  While we hate to blame everything on global warming, the change in our environment has let to warmer, wetter time periods.  These changes are causing a shift in allergens, in fact, some plants are able to extend their range due to climate change.  So a plant or weed that might cause an allergy that only existed in the region to our south may now be making an appearance in our area.

There are several energetic patterns that can result in ear infections, the most common being “damp heat in the Gall Bladder channel”.  While this sounds quite esoteric, it’s actually an accurate anatomical & physiological description when compared with “conventional” Western medicine.  The expression “damp heat” is an indication of something stimulating an excess of energy in an area that is creating heat and moisture–this is often  bacteria & yeast, but can also be other inflammatory sources (allergies, irritants, etc.).

The “Gall Bladder channel” is one of many energetic pathways (similar to but different than nerves & blood vessels) in the body.  It is quite a long and involved channel which runs from the face, around the ears a few times, down the back, and all the way to the tip of the 4th toe.  While the channel is named for the Gall Bladder organ, the energetics it controls expand much farther than helping with digestion & detoxification to include decreasing inflammation in the head & neck, reduce hip pain, and calming anxiousness.

In the cases of Gall Bladder damp heat, we aim to rebalance the energetics of the channel to allow for resolution of the pain & inflammation, as well as stimulating the immune system to protect & repair the affected area.

Treating these infections usually involves a combination of topical medications/herbals, oral herbals, and potentially acupuncture, as well as other modalities as indicated. 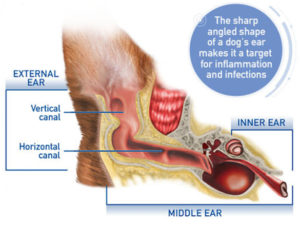 The first problem for the dog’s ear is structural. As demonstrated by the illustration, the dog’s ear canal has both a vertical and a horizontal component, unlike the human ear canal which goes straight in. This “J” shape of the dog’s ear creates a predisposition to ear infections as debris must work its way upward rather than straight out. If ear wax cannot get out, it accumulates. Accumulation of ear wax, skin oil, and other debris feed the bacteria and fungi that live in the normal ear canal leading them to proliferate. Soon an infection results.

Anything that facilitates ear wax accumulation, sets the stage for ear infection. It might be the narrowed ear opening of the Shar pei further hampering ear drainage, irritation from water in the ear canal after a bath, or actual disease causing over-production of ear wax. Allergic skin disease affecting the ears is the most common cause for recurring increased ear wax production/ear infection; other causes of ear infections include ear mites, and foreign bodies in the ear (such as grass awns or foxtails), or hair growth deep in the canal (common in poodles and schnauzers especially). The moisture of the wax promotes bacterial growth, yeast proliferation, and perhaps even pus development.

It isn’t long before the pet is seen scratching at his ears, shaking his head or holding one ear slightly dropped. Discharge and odor may be noticeable to you.

Ear infections are common and can be challenging. Fortunately, most cases are simple and easily cleared up. Be sure to recheck the ears as your veterinarian recommends as premature discontinuance of treatment can lead to a continuing infection.

Level One: The Simple Ear Infections
Most ear infections are cleared up simply with professional cleaning followed by medication at home. If only mild debris is present in the ear canals, simple disinfection and washing of the ear is adequate; however, in many cases, a full ear flush is needed to even examine the eardrum. For patient comfort, we recommend sedation for this procedure as the ears are sore and the instruments can be damaging if the pet jumps at the wrong time. A sample of ear discharge is commonly examined under the microscope so as to assist in selecting medications for home use. After a couple of weeks of home treatment, the ear canals are rechecked to be sure the infection is gone. In most cases this completes treatment but for stubborn cases, we must proceed to the next step.

Level Two: On-Going Ear Infections
Some dogs have chronic ear problems (the infection is not controlled by general medication or returns when general medication is discontinued). In these cases, the ear discharge should be cultured so that the precise organism can be pinpointed and treated specifically. Regular treatment at home with disinfecting ear washes should become part of the pet’s grooming routine.

Further testing may be in order to determine why the infection continues to recur. Allergy is the most common reason for recurrent ear problems but hormone imbalances can also be underlying causes.

Chronic inflammation has lead to proliferation of ear tissue. Bacteria and discharge can hide in all the nooks and crannies. The vertical canal has been surgically opened so as to facilitate cleaning. (Photo by Dr. Erin Marley)

Level Three: The End-Stage Ear
Some ear infections simply cannot be controlled with the above steps. These cases have gone beyond medical management and must proceed to surgical management. What this entails will depend on the state of the ear canal. Your veterinarian will make recommendations accordingly.

Chronic inflammation has led to proliferation of ear tissue.

Proliferative Ear Canal Change and Middle Ear Infection
A routine ear infection is uncomfortable enough but if the infection persists, it can become an even bigger problem. The infection can lead to proliferation and scarring in the canal which makes the infection especially difficult (and potentially impossible) to clear up. The ear canal may mineralize and the middle ear may come to be involved, leading to nerve damage. Affected animals may have a head tilt, a lack of balance, and unusual back-and-forth eye movements (called nystagmus.) These symptoms are called vestibular signs and represent a complication of middle ear infection. Middle ear infections can also cause paralysis of the facial nerve, leading to a slack-jawed appearance on that side of the face.

Severe cases may require surgical intervention to remove the vertical portion of the ear canal (lateral ear resection) or even remove and seal the ear canal (ear canal ablation). It is important to control ear infections before they reach this stage if at all possible.

When a dog with uncomfortable ears shakes and scratches vigorously, a blood vessel in the earflap may rupture. This leads to bleeding into the tissues of the pinna (ear flap). The usual recommendation is to have the blood clots removed and the ear bandaged and cleaned under anesthesia. If the hematoma is not so big as to occlude the ear canal (thus preventing medication of the ear canal), the option to forgo surgery exists; but without surgery, the ear may scar down into an abnormal appearance.

Ear infections are common and can be challenging. Fortunately, most cases are simple and easily cleared up. Be sure to recheck the ears as your veterinarian recommends as premature discontinuance of treatment can lead to a continuing infection.